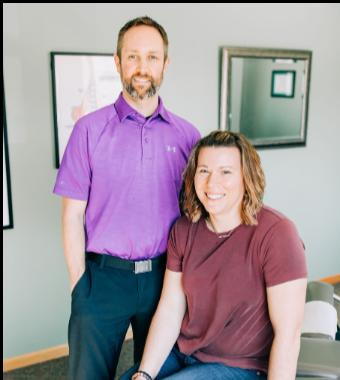 Summary: Tim was a 28 year old veteran that suffered from knee pain for 4 years. Up to this point he'd been to his medical doctor' at the VA and through PT and he was unable to find relief. Tim was treated in our office for IT Band Syndrome and after 2 treatments was out of pain and has had no issues with his knees for currently 6 months.

Tim was a 28 year old veteran suffering with knee pain for over 4 years. He was to the point of standing for more than 5 minutes would cause his pain to spike and he would need to sit down to relieve the pain. His knee pain started while he was in the army and he was honorably discharged. During his end exam the doctor's at the VA told him his X-ray and MRI's of his knees were normal. They said one option would be an exploratory surgery to see if anything is going on with the knee internally.

As a chiropractor that's certified in FAKTR we conducted a comprehensive knee evaluation. We noticed the following findings in Tim's knee and back exam.

Here is a short video of our treatment of Knee pain and IT Band Syndrome.

Tim has a condition called IT Band Syndrome.

I discussed with Tim our treatment plan. To give Tim the best opportunity to achieve his goals of standing pain free and walking without pain we would use a combination of FAKTR soft tissue therapies and home rehab exercises. I explained to Tim that his response depends on how severe the tissue injury has been. I also explained to him the importance of strengthening the support muscles in the hip to stabilized the knee. Most of this strength would be developed from a home exercise plan.

After 2 treatments Tim was able to stand pain free and complete all his daily activities without pain. At 6 months Tim was still pain free and experiencing no issues with his knees.

Tim has been just one of many patients who has responded to our treatment of knee pain. If you are dealing with a similar issue feel free to learn more about our office. If you feel you need help please contact our office and we'd be glad to help!

Thank You for taking the time to read Tim's story!

The patient's name has been changed to protect privacy rights.

Find us on the map

Send us an email